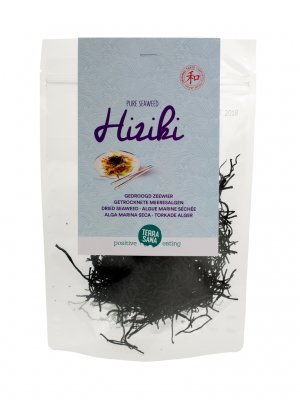 Fusiforme Hiziki is stringy black seaweed that grows best on submerged rocky ledges along the Pacific coast. Because it prefers sunlight, hiziki grows at a depth of one to two meters. The consistently tiny, rich black curls of Muso's hiziki indicate the highest quality available. It will cook to a firm texture that imparts a delicious, enduring taste, and its shimmering black color will highlight most meals.

Hiziki requires a year of growth and is harvested in spring by hand. Unlike other varieties of seaweed, which are merely sun-dried and require no further processing, hiziki is very tough in its natural state so that it must be dried, steamed for four hours and dried again. It is then soaked into the juice of arame(sea vegetable) to enhance the black color and sun-dried a final time.

Hiziki will keep for a long time without special storage. It is an excellent source of minerals, including iron when fresh vegetables are out of season. Hiziki contains fourteen times the calcium of cow's milk and also contains large quantities of protein, vitamin A and B, and iron. When hiziki is cooked, it will swell to 5-6 times of its actual size.

Basic preparation : * Soak hiziki in water for 15-20 minutes. (do not over-soak hiziki or it will become mushy and slick.) * Save the water which the hiziki is soaked in for use later. (It contains valuable flavors and nutrients.) * Quickly rinse the hiziki after soaking to rid it of any dirt matter.